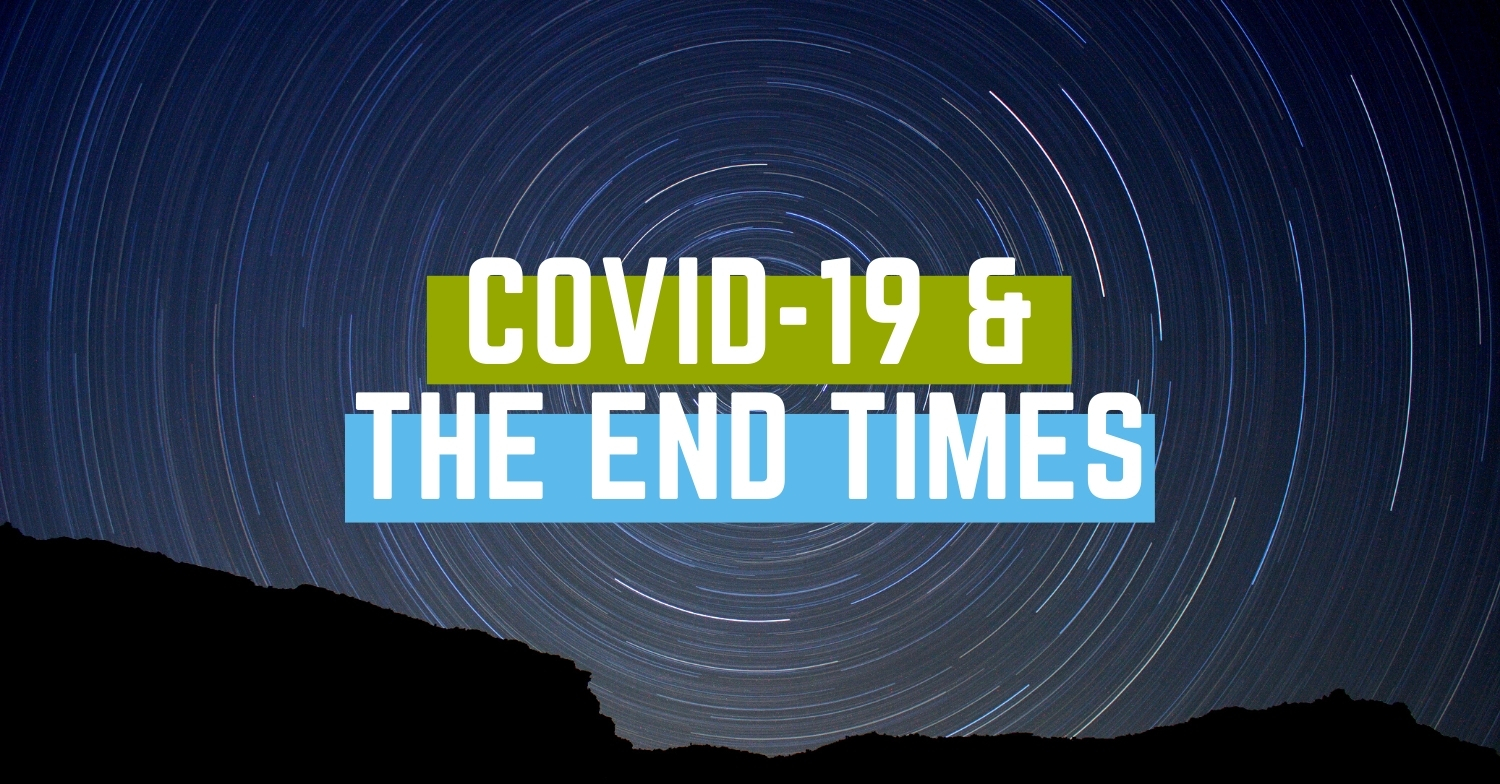 Over the past number of months, many of you have asked me about how the Covid-19 pandemic relates to the Bible’s teaching on the “End Times.” Of course, the answer to that question depends on one’s theological understanding of the “End Times.” There is no shortage of speculation and opinion that can be found on the internet which makes trying to get a straight answer very difficult. Recently I came across a series of very helpful blog posts written by Cochrane’s own Dr. Kevin Peacock, Professor of Old Testament & Hebrew at Canadian Southern Baptist Seminary and College. In my perspective, his posts (helpfully merged into one single essay below) give a balanced perspective that can help us stay alert and make sense of our times. I thank Dr. Peacock for making his reflections available to us as a church.

The Bible, the Coronavirus, and End Times

With the onset of the worldwide pandemic of the coronavirus, I have found myself in several discussions regarding what this pandemic might have to do with the Bible and “End Times.” Specifically, some preachers are pointing to the mentions of “pestilence” and “plagues” in the book of Revelation as biblical evidence that the end is near. It is always a good thing when people search the scriptures for understanding to present circumstances, and even though the subject of “end times” can be a quite controversial subject among Bible students, it is worth taking a look at the scripture to gain an understanding of the ways of God and what He has told us in His word.

Here are a few of the questions I have been asked lately.

Is the coronavirus God’s way of punishing us?

It is true that in the Bible God sometimes used plagues and disasters as punishment for sin. Anyone who reads the story of Noah and the Great Flood (Genesis 6-9) would remember that extreme disaster could come from the hand of God Himself. God used plagues to punish Pharaoh’s hardened heart (Exodus 7–12) and Miriam’s sin (Num 12:1–15). God warned of sending “pestilence” and “plagues” in judgment (cf. 2 Chr 7:13; Ezk 5:17; Luke 21:11; Rev 18:8).

However, before the biblical acts of judgment, God sent a prophet to warn the people. Moses warned Pharaoh and the prophets warned the Jewish people before they fell to Assyria and Babylon. In fact, this is what Amos said when defending his own prophetic ministry of announcing God’s punishment upon His people:

Surely the Lord God does nothing (i.e. send judgment)
Unless He reveals His secret counsel to His servants the prophets.
A lion has roared! Who will not fear?
The Lord God has spoken! Who can but prophesy? (Amos 3:7-8)

This was the ministry of the prophets, to be the very mouthpiece of God. In the face of Israel’s sinfulness, they would announce God’s impending judgment if they did not repent.

In addition, biblical judgments are directed against specific sins. Asa was stricken with a disease in his feet for not relying upon the Lord (2 Chr 16:7-12). Uzziah was stricken with leprosy for his prideful sin in performing priestly duties (2 Chr 26:16–21). King Herod was afflicted with a horrible disease for his sin of claiming divinity (Acts 12:20-23). I could go on, but at this point I am not aware of any prophetic warnings or specific sins related to the coronavirus.

It is important that we also note that not all physical suffering is the result of sin. Job suffered horribly even though he was innocent (Job 2:7). Godly King Hezekiah was sick to the point of death (2 Kgs 20:1). Dorcas was known for her godliness, kindness, and charity towards others, yet she fell sick and died (Acts 9:36-37). And when it comes to innocent suffering, the prime example would be Jesus’ death on the cross. Not all suffering is tied directly to someone’s personal sin. [Dr. Jim Denison, Biblical Insight to Tough Questions: Coronavirus Special Edition, 6-7]

In the absence of any prophetic warnings or any direct tie to a specific sin, the coronavirus is a stark reminder that we live in a world that is broken and dangerous. Our world is fallen, and it is not how God created it to be. In fact, the truth be known, our world is broken because we broke it. Sin has done untold damage to God’s good creation. This was God’s pronouncement when Adam and Eve brought the first sin into the world,

Our sin has wreaked much misery and pain onto God’s good creation. We now live in a world where disasters happen, plagues, illnesses, and coronaviruses occur. The Apostle Paul states it this way:

For the creation was subjected to futility, not willingly, but because of Him who subjected it, in hope that the creation itself also will be set free from its slavery to corruption into the freedom of the glory of the children of God. For we know that the whole creation groans and suffers the pains of childbirth together until now. (Rom 8:20-22)

No, our world is not how it is supposed to be, or how God created it to be. Coronaviruses are a stark reminder that we need a Saviour.

Is the coronavirus a sign of the End Times?

Before answering that question, let’s set a little history and context. You may have overlooked this fact, but several pandemics are presently raging in the world today, from malaria and cholera to tuberculosis and AIDS. You may not live in an area of the world that is experiencing these maladies, and they may not have touched you personally, but coronavirus is not the only pandemic the World Health Organization is tracking and fighting.

Throughout history, millions have died from pandemics. Christians faced the Antonine Plague in AD 165, the Plague of Justinian in 541–42, and the Black Death in 1346–53, as well as seven cholera pandemics, the Spanish Flu of 1918, and the Asian Flu of 1956–58. [Dr. Jim Denison, Biblical Insight to Tough Questions: Coronavirus Special Edition, 4]

So, the coronavirus, although severe and horribly tragic, is not unique in human history – not even in present history. If we want to talk about loss of life, in World War II, German and Japanese aggression resulted in more than 7.4 million Germans dying and 3.1 million Japanese deaths.

We indeed live in a broken world.

In terms of the “end times,” that also needs some context. If you do a search of the phrase “last days” in the scripture, it is rather revealing.

‘And it shall be in the last days,’ God says, ‘That I will pour forth of My Spirit on all mankind; And your sons and your daughters shall prophesy, And your young men shall see visions, And your old men shall dream dreams (Acts 2:17)

God, after He spoke long ago to the fathers in the prophets in many portions and in many ways, 2 in these last days has spoken to us in His Son, whom He appointed heir of all things, through whom also He made the world. (Heb 1:1-2)

But realize this, that in the last days difficult times will come.For men will be lovers of self, lovers of money, boastful, arrogant, revilers, disobedient to parents, ungrateful, unholy,unloving, irreconcilable, malicious gossips, without self-control, brutal, haters of good,treacherous, reckless, conceited, lovers of pleasure rather than lovers of God,holding to a form of godliness, although they have denied its power; Avoid such men as these. (2 Tim 3:1-4)

It seems quite clear from these NT passages that the last days began with the coming of Jesus and the Holy Spirit at Pentecost – and one day they will be culminated when He comes again.

Now, to the question, is the coronavirus a sign that we are close to the end of time? Most every widespread tragedy tends to bring about that kind of question – is this the sign of the end?

Virtually every generation since the time of Christ has believed it was the final generation, that Christ would return before that generation died. (I say ‘virtually’ to qualify that I have not done enough historical study of every single generation, but every one that I know of.) Each generation read the “signs of the times” and the scripture and came to the conclusion that the end was near.

Are we living in the “End Times”? Yes.

Could Jesus come back shortly? He very well could be, and we must always be ready for it.

Is coronavirus a sign of the End Times? Not necessarily.

Is it only going to get worse? In other words, is this the tribulation?

Again, the term ‘the tribulation’ needs a sense of scriptural context to determine if what we are thinking of is indeed what the Bible is speaking about. The scripture teaches that followers of Christ should expect tribulation in this world.

These things I have spoken to you, so that in Me you may have peace. In the world you have tribulation. But take courage; I have overcome the world.” (John 16:33)

After they had preached the gospel to that city and had made many disciples, they returned to Lystra and to Iconium and to Antioch, strengthening the souls of the disciples, encouraging them to continue in the faith, and saying, “Through many tribulations we must enter the kingdom of God.” (Acts 16:21-22)

Who will separate us from the love of Christ? Will tribulation, or distress, or persecution, or famine, or nakedness, or peril, or sword? (Rom 8:35)

Be devoted to one another in brotherly love; give preference to one another in honor;not lagging behind in diligence, fervent in spirit, serving the Lord;rejoicing in hope, persevering in tribulation, devoted to prayer, contributing to the needs of the saints, practicing hospitality. (Rom 12:10-13)

“Then they will deliver you to tribulation, and will kill you, and you will be hated by all nations because of My name. (Matt 24:9)

The NT speaks of “great tribulation,” an unprecedented time of global suffering at the end of the age, that is somehow related to the Second Coming of Christ. It speaks of war and violence, famine and persecution, suffering, tribulation and apostasy.

But pray that your flight will not be in the winter, or on a Sabbath. For then there will be a great tribulation, such as has not occurred since the beginning of the world until now, nor ever will. Unless those days had been cut short, no life would have been saved; but for the sake of the elect those days will be cut short. (Matt 24:20-22; cf. Mark 13:19)

It speaks of cosmic upheaval (sun, moon, and stars).

“But immediately after the tribulation of those days the sun will be darkened, and the moon will not give its light, and the stars will fall from the sky, and the powers of the heavens will be shaken. And then the sign of the Son of Man will appear in the sky, and then all the tribes of the earth will mourn, and they will see the Son of Man coming on the clouds of the sky with power and great glory. (Matt 24:29-30; Mark 13:24-27)

It speaks of catastrophes on the earth (e.g. earthquakes, pestilence, drought, fire, etc.) – these may be literal or simply the apocalyptic imagery common in the day.

Bible interpreters see these passages differently in terms of the timing of these events, in terms of whether they refer to events that happened in the first century, will happen in our future, or some combination of both. Interpreters also differ on whether or not God’s people will even be around when this “tribulation” happens.

Regardless, this is clear from the message of those passages:

In terms of the question, “Is it only going to get worse? Is this the tribulation?” A biblical answer to that question probably also needs to address these questions: ·