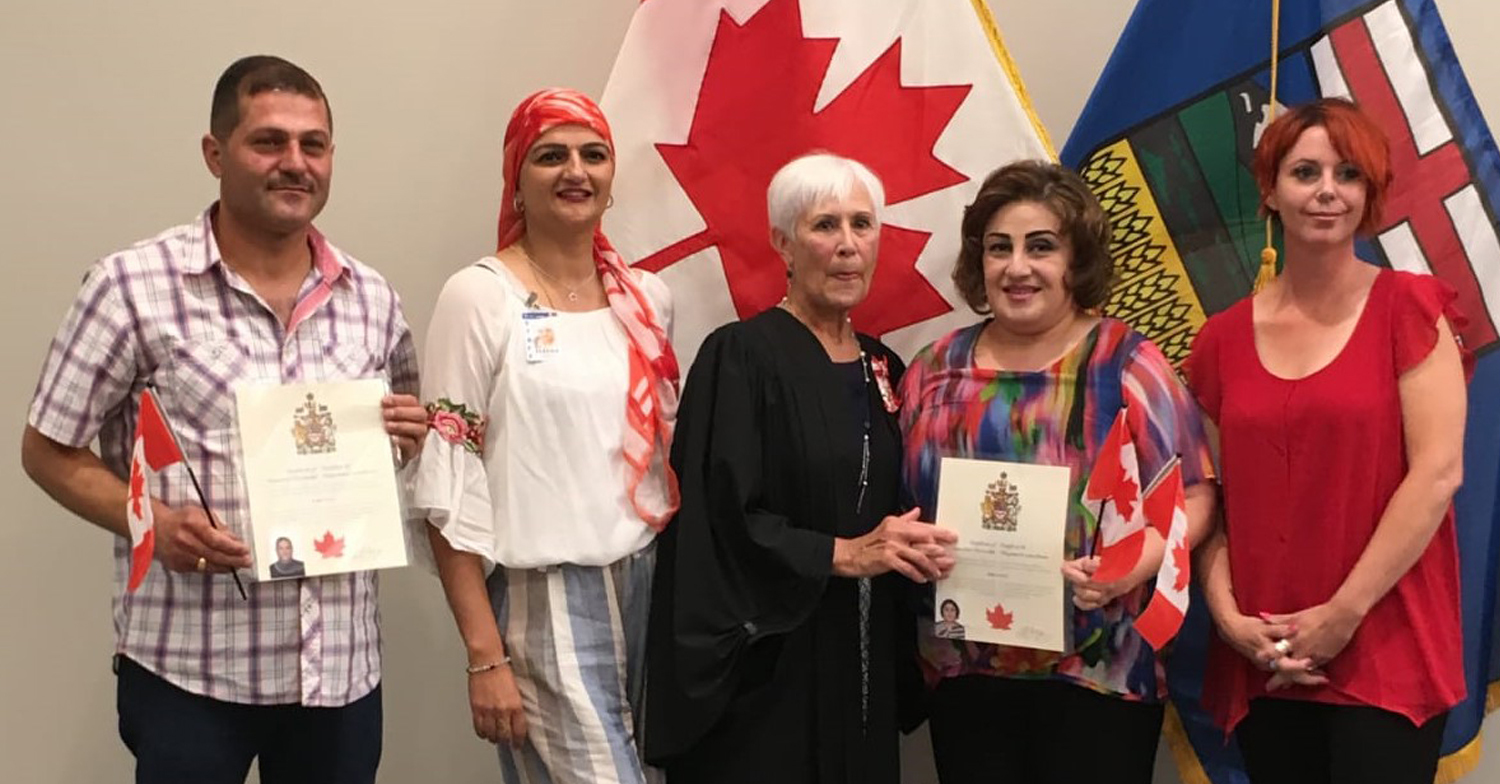 Roba and Ramez Assaf and their family came to Cochrane at refugees three-and-a-half years ago through the leadership and support of Cochrane Syrian Refugee Sponsorship Group. On August 25, they became Canadian citizens at a ceremony in our building. Many people from Cochrane Alliance participated in the process and gave support to the Assafs as they settled into Cochrane. The following thank you note was published in the Cochrane Times on Wednesday, August 28.

Three-and-a-half years ago, I and my husband, Ramez, with our daughter and two boys, one of them just a month old, arrived from Syria in Cochrane to begin a completely new life here.

Because of my studies at school and the University of Damascus, I could speak and understand English. Ramez and the family spoke little to no English. We have had to deal with difficult health issues. Our income has been minimal; our lives not easy.

But, on August 25, we reached a joyful milestone when we became Canadian citizens at a ceremony in Cochrane, and embarked on a new adventure in our adopted homeland.

We feel much gratitude that we have been accepted as citizens. We respect that Canada has policies that welcome newcomers. And, as with other milestones we’ve achieved during our lives in Canada, we received much help from Cochrane and area citizens.

The purpose of this letter is not to relive the past, but look to the future. It is also to thank all the people who have given so much with their time and their money to support us since we came. We have made many dear friends.

It is too difficult to name these people because I might miss someone. But the generosity started with the Cochrane Syrian Refugee Sponsorship Group that supported our first year in Canada.

Several Cochrane and area people have become like family to us as they brought their love, loyalty and commitment into our home. It is hard to express my gratitude to them.

Private and informal donations have kept us going during our challenging journey, helping us with transportation, furniture, toys, food, accommodation, and general living expenses. Their moral support has been vital, too.

Private donations paid for the cost of our application for Canadian citizenship. Other financial gifts paid toward driving lessons with the Cochrane Driving Academy that I hope will lead soon to an Alberta’s driver’s licence for me. Ramez already had the equivalent of a Class 2 licence from Syria.

People donated for an annual pass at the Spray Lake Recreation Centre. Going regularly to the pool has really helped our children.

Apart from caring for my family, many of my efforts have been directed toward taking an on-line program in Child Care from Grande Prairie College. I was proud to finally receive my certificate of completion in June. I hope it will lead to opportunities in child care.

There are many groups which have helped us in our journey and to which we are very grateful. I will try to name them. Please, excuse me if I have omitted any. In no particular order, they are Mount Saint Francis Retreat, Calgary Catholic Immigration Services, Cochrane Family and Community Support Services, Cochrane Alliance Church, St. Andrew’s United Church, Home Treasures, Helping Hands, Cochrane Driving Academy, Spray Lakes Sawmills Family Sports Centre, Boys and Girls Club, Federal Government of Canada, Alberta Government, Calgary Catholic School Board, Rocky View School Division, Cochrane Activettes Food Bank, Cochrane Medical Centre, Cochrane Toyota, our Cochrane landlord, the volunteers who helped with English as a Second Language classes.

This all amounts to an overwhelming amount of help. Our challenges are far from over. But the individuals and the organizations that have supported us give us hope to continue our journey and have optimism for our future life in Canada.

In my own language, we say “chakrun.” Thank you to everyone.